The American crow is a large, black bird of the Corvidae family. The corvid family includes ravens, jackdaws, jays, rooks, magpies, treepies, choughs, and nutcrackers. They are known as corvids, the crow family. The American crow was first described in 1822 by Christian Ludwig Brehm, a German ornithologist.

The American crow is a large bird with a thick neck. When flying, their wings are rounded and broad with wingtips outspread.

Their feathers are iridescent black and can look purplish, green, or blue. A crow with brown, scaly feathers is due to molting. They have black, strong legs and feet and a black, slightly hooked bill with bristles over their nostrils.

They can be distinguished from the common raven as they are about 1/3 the size. Unlike ravens, the American crow does not fluff their throat feathers, although the fish crow does. American crows also have shorter tails and wings. The main difference can be seen when they fly. Crows flap their wings every few seconds while ravens soar.

Wild American crows live up to 8 years in the wild, much less than the 30 years they have been known to survive in captivity.

Crows with blue eyes and pink mouth can be identified as juveniles. However, these areas will get darker as they become adults. Their tail feathers are more pointed and symmetrical than adults. During their first winter and spring, their feathers become brown before they molt.

Find out about Allen’s hummingbird here

The American crow is widespread and can be found throughout most continental United States, Southern Canada, and Northern Mexico.

Although permanent throughout the U.S, most crows in Canada migrate southwards in winter for the warmer weather.

Open grassland and agricultural farming areas allow American crows to find food, and they will use forest edges for roosting. American crows can be found in suburban areas and parks and can often be found in coastal areas, especially in the Pacific Northwest.

Did you know there are 10 species of jay living in North America?  Find out more here

Although a crow’s brain is only about as big as a human thumb, their brains are very complex. Crows are very social and can form large flocks of hundreds or thousands called murders in winter. Their winter roosting behavior consists of them assembling in the afternoon before moving to a roosting area for nightfall.

Crows are excellent problem-solvers, learning garbage truck routes, learning how to get into containers, holding food under their feet, and using their bills to open it.

Although they are mostly friendly to each other, they are aggressive to other birds and often chase away much larger birds, including birds of prey. They will often do this in groups but will even do this on their own.

Many American crows are cooperative breeders and stay close to where they are born. They help other family members raise their young while defending the territory against other predators.

Crows have excellent memories and will remember someone that has wronged them. They communicate this information to other crows and make that person’s life miserable by divebombing and harassing them whenever they see them. They will also remember people that are kind to them and will sometimes bring trinkets to these people.

Crows have also been seen to have funerals for dead crows. They have been observed sitting in trees around the dead body, with reports of them putting twigs and leaves on the dead bodies before they all fly off.

Do you know if birds can see in color?  Find out in this article I wrote

Their courtship consists of the male facing females before fluffing up their body feathers, spreading their wings and tail, and bowing in front of them while singing. Once accepted, they will preen each other’s feathers and touch bills.

An American crows nest is made of twigs, sticks, bark, mud, and weeds lined with grasses, moss, plants, and feathers. The nests are built in trees such as conifers or oaks, although they can sometimes be seen in bushes, while rarely on the ground.

The nesting season can start as early as April, with three to six eggs laid. They are incubated for 17 days and are fledged by 36 days. Juveniles normally stay close to the nesting site for around four years, although they can breed after two.

Being cooperative breeders, offspring from the previous year will help rear the new nestlings.

American crows are omnivores and are opportunistic, feeding on anything edible. They have been known to learn the garbage collection routes lorries to scavenge from and can often be seen around dumps.

They generally feed while on the ground but can also be seen feeding along tree branches. Being intelligent, they have been seen dropping mollusks and hard-shelled nuts while flying to break them open on rocks below.

They will eat a variety of insects and worms, which are a good source of protein. They will also eat fruits, grains, and nuts, especially in fall and winter when walnuts and acorns are plentiful. They don’t eat very often from bird feeders, however.

American crows will also feed on amphibians such as frogs and toads and mammals, including rabbits and mice. Eggs of other birds are a particular delicacy for crows.

They will also store food in hiding places known as caches. They usually have more than one cache, which they use to store meat and nuts when they are plentiful. Caches may either be placed in trees or on the ground.

Crops are another food that they will eat, with corn and wheat making up a portion of their diet. This has led to many farmers seeing the crow as a pest.

Nothing is off-limits to the crow, with spiders, snails, snakes, and even carrion in their diet. You can often see them feeding on roadkill and garbage.

American crows are extremely talkative and vocal. Unlike many other birds, the songs that the male and female sing are the same. Their vocals are complex, made up of caws, but they have over 20 different combinations.

They use caws repetitively, forming a rhythm. Alarm calls are shorter and sharper caws called kos. Territorial sounds are generally longer, and exchanges between neighboring territories sound like they are imitating each other. Caw-caw, usually two short sounds, are used to rally the troops to the presence of predators.

How To Stop Crows Digging Up Your Lawn 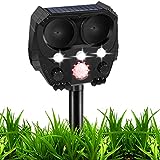