Maryland is home to over 100 different species of mammals, but surprisingly few of these are classed as carnivores. In this article, we look at what these animals are and where you can find them

For more information on these animals that live in the state of Maryland, please read on.

The American black bear is a midsize mammal from North America. Not true to their name, their color is not always black. They can also be found with brown, tan, or even blonde fur.

They measure from 130 to 190 cm and weigh from 200 to 300 kg. Although classed in the order Carnivora, the black bear is an omnivore with a varied diet.  This consists of fish, mammals, insects, grasses, roots, and berries.

Black bears can be found in most forested areas, with the highest populations in Garrett and Allegany counties. There is also a good chance to see a black bear in Washington and Fredrick counties.

Ever wondered if you can outrun a bear? Find out in this article I have written here

The American mink is a semiaquatic mammal from Canada and the United States. Their color varies from tan to dark brown or black. Mink measure about 62 cm and weigh about 1 kg.

Mink are carnivores and eat frogs, fish, salamanders, birds, muskrats, eggs, crayfish, mice, and voles. Their lifespan is three years in the wild and ten years in captivity.

Mink live near water bodies and close to trees. In Maryland they can be found in most areas except the eastern shore. Mink are quite common in the state.

The bobcat is a nocturnal and elusive, midsize wildcat related to the lynx. Their appearance is like a big domestic cat with a bobbed tail. Their color can range from grayish brown to red, with a white underbody. They measure from 47 to 125 cm and weigh from 8 to 9 kg.

The bobcat eats raccoons, squirrels, rodents, rabbits, birds, reptiles, skunks, and sometimes even deer. They have extraordinary night vision and can live in all types of habitats across the central section of North America. Their lifespan ranges from 10 to 12 years.

Although uncommon in Maryland, the bobcat can be found on the coastal plain, Piedmont, and western Maryland.

The coyote is a midsize canine with a domestic dog’s look and is thinner and smaller than the gray wolf.  Their color is grayish-brown with a white underbody.

Coyotes measure about 1.5 m (including the tail) and weigh from 6.8 to 21 kg. Their lifespan ranges from ten to fourteen years in the wild and up to twenty-one years in captivity.

Coyotes are now quite common in Maryland. First spotted in 1972, the coyote population has expanded statewide from the west. The highest density is in western Maryland, with the population thinning out as you head east towards Delaware.

Are coyotes dangerous to humans? Find out here

The Eastern spotted skunks are a small-sized skunk species found inhabiting the Great Plains and Southeastern Woodlands. They can also be found in Canada and the northeastern regions of Mexico.

The Eastern spotted skunk typically measures between 46 and 68 cm in body length, and their body range spans between 0.2 and 1.8 kilograms. Males are usually bigger than females.

Eastern spotted skunks have four stripes on their back, which are broken in a pattern, giving a spotted appearance from which their name comes from.

They are more active compared to other species of skunks. Their main predators are mostly big cats, owls, and bobcats. During wintertime, up to eight skunks can share a burrow underground. Eastern spotted skunks are quite secretive and rare for humans to spot. They do not hibernate but tend to reduce their activity during the winter season.

The least weasel is also known as the common weasel or little weasel.  They are the smallest member of the genus Mustela. They are native to North America, Eurasia, and North Africa. Their bodies are slender and elongated, with relatively short tail and legs.

The average body length is around 130 to 260 mm, and they weigh between 36 to 250 grams, with males being slightly bigger than females.

The color of the least weasels’ pelage varies according to the geographical location, but underparts are usually white, and the back, limbs, and tail are a shade of brown. Their diet consists mainly of small rodents. Males mark their territory with olfactory signs and are strongly territorial and dominant weasels.

The least weasel occupies a wide range of different habitats and can be found throughout Maryland.

Do you know the difference between a weasel and a stoat?  Find out in this article I wrote.

The long-tailed weasel is a fearless, aggressive hunter. They are also known as the bridled weasel or the big stoat. Their color is reddish-brown with a light yellow underbody, but they are completely white in cold northern regions.

The long-tailed weasel measures from 23 to 35 cm and weighs from 85 to 267 g. They are carnivores and can attack animals that are twice their size.

They eat mostly mice, voles, rabbits, chipmunks, birds, eggs, and insects. They live in grasslands and thin forests in sub-tropical areas with mild temperatures in the southern states of North America. Their lifespan is up to five years.

The long-tailed weasel is common in Maryland and can be found throughout the state.

The river otter is a smart, semiaquatic mammal found in the northern states. The river otter has short, very dense fur. Their colors vary from gray to brown, with a lighter underbody.

They measure from 66 to 107 cm and weighs from 5 to 14 kg. River otters eat fish, turtles, frogs, crayfish, and insects.

They live in aquatic habitats in the northern part of North America. Their lifespan is eight to nine years in the wild and fifteen to twenty years in captivity.

The North American river otter can be seen mostly along tidal areas in Maryland.

Have you ever wondered why otters hold hands?  If you want to know, I have written this article.

The striped skunk is a mostly nocturnal species of skunk found in the central states of North America. Their color can be black, gray, or brown but always has a white stripe on their back running from head to tail.

They measure from 52 to 77 cm and weigh between 1.8 to 4.5 kg. Striped skunks are omnivores and eat crickets, grasshoppers, beetles, caterpillars, mice, voles, eggs, and small birds.

The striped skunk lives in open areas such as grasslands or thin forests in southern Canada, the United States, and northern Mexico. Their lifespan is up to seven years.

Striped skunks can be found throughout Maryland.

link to 10 Most Dangerous Animals In North America

When it comes to dangerous animals in North America, many on this list may be surprising. Some animals may not be dangerous by nature, but their behavior certainly puts human lives at...

North America is a continent rich with wildlife of all shapes and sizes. Some of the largest animals in the world live here. There is a wide variety on this list, including land mammals, birds,... 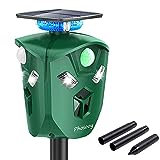